Gimpy Puts a Damper on the Turtles

Posted by islandmoosie on September 28, 2018
Posted in: Uncategorized. Leave a comment

Toast with the French butter, and coffee for breakfast. This is like that 50 First Dates movie, it’s the same exact thing everyday to start our day. Every. Single. Day.

Our plan for the day was to snorkel with the turtles at Hooper’s Bay, and a return to Jolly Hall beach, one of Hook’s favorite beach. I noted that low tide was around 4-ish in the afternoon so I said that we should hit Jolly Hall first, and then head to Hooper’s later so that the tide is lower and the snorkeling by the dock where the turtles hang out is not terribly deep.

We get to Jolly Hall and I noticed that Hook is really limping along as we walk through the beach access. He had strained his knee the other day trying to show off on how I should have properly stepped-off the low wall at the villa instead of miscalculating the drop like I did and falling. Well wouldn’t you know it, he also miscalculated the step-off and ended up hurting his knee. He had been icing it since and I noticed that it was swollen. Today he was struggling to keep up.

We were the only ones at Jolly Hall when we got there. It was a bit wavy, but boy was it beautiful. Hook quickly declares it to be his second favorite beach. 😎 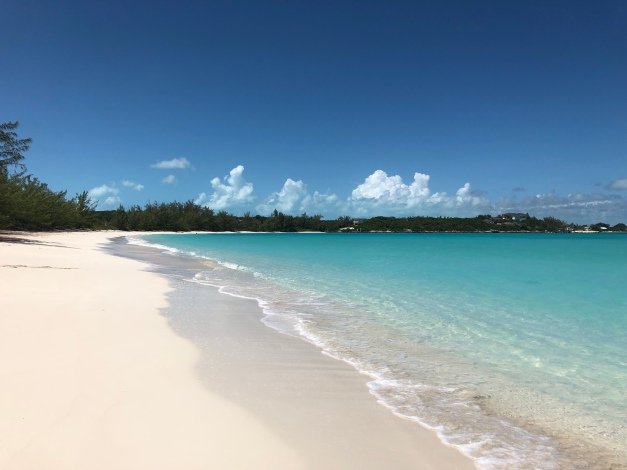 We pick our spot and set up our stuff. The sand calls to me and I set off to do my obligatory walk to the far end. I relish the bright sun, soft, powdery sand, and the warm waters lapping at my feet. Ahhh. Pure heaven.

I make it to the far end. I spy a small shadow swimming just offshore and see a head pop out. A turtle! There was a turtle swimming by! I get excited but he is too far offshore to take a photo with my phone.

I step over to the other side to take a peek at the waters of Elizabeth Harbour and the beach towards the hotel zone. What a contrast. Hands down Jolly Hall is the real deal when we talk of beaches in Exuma.

When I return I see Hook is again icing his knee with our ice from our cooler. Not good. I tell him that we should dump Hooper’s and instead grab some lunch from town then head back to the villa to give his leg a rest. I’m thinking no way he can limp through the beach access and walk the beach down to the dock where the turtles are. What I don’t tell him is that I forgot my underwater camera back at the villa and I wouldn’t want to swim with the turtles and not be able to take photos! Ha! 😬

We shoot the breeze for a while, commenting on the villas in the distance. 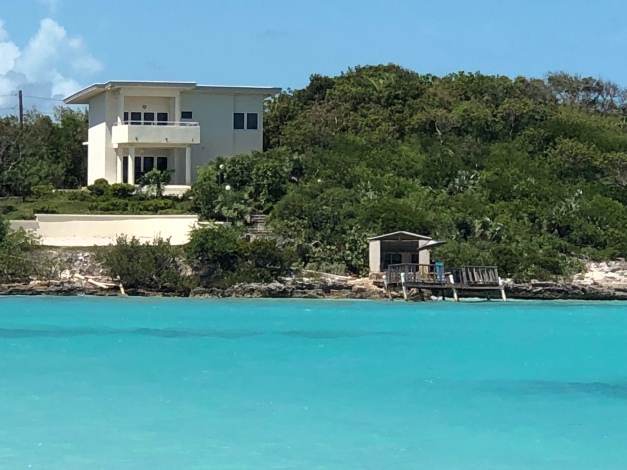 By this time there was another couple who has joined us at the beach. Time to move on. Bye Jolly Hall, it’s been a jolly good time.

I’m in the mood for some chicken wings so we head to town to get a takeout from Island Boy Cafe. The restaurant is located next to Exuma Market. 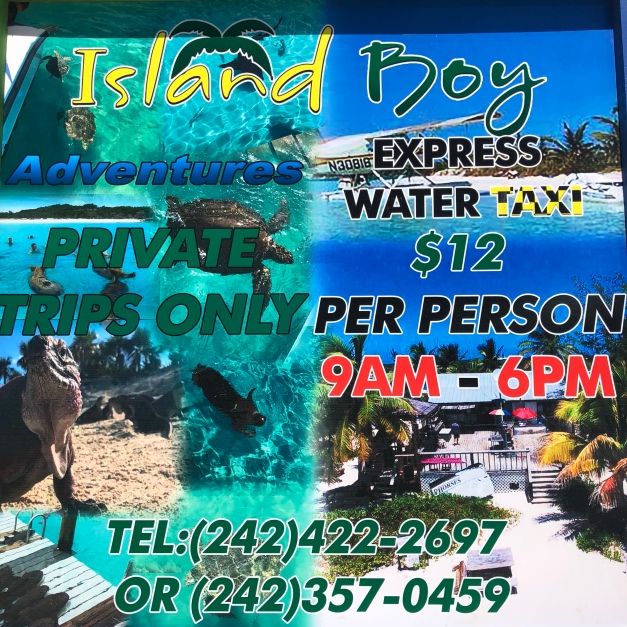 Town was busy and parking was at a premium. Hook drops me off while he circles back around to find a spot to park while he waits for me. The inside eating area of Island Boy was closed and a sign indicated to place orders at the outdoor bar in front of the cafe. I place my order of chicken wings and choose the honey garlic sauce, then wait… And wait… And wait some more. I start writing one of the blog entries and I am engrossed in writing. Every once in a while I look up, afraid to miss them calling my name to pick up my order. Nope, no sign of those order of wings being ready. I wait some more… And wait… It’s 2pm, shouldn’t the lunch rush be over by now?

Finally it was ready and I happily pick up my takeout box. Hook comments that it took almost an hour and he was able to watch all the goings on in town while waiting for me.

The wings smell good as we zoom on back to the villa. It’s around a 20 minute drive from town to the villa. As soon as we turned on the driveway, Hook suddenly blurts “Let me see the chicken”. Out of nowhere! While we were still moving! I’m like, “What?? Just one more minute and we’ll be at the villla. You can look then!!” What the fuuudge?! 🙄

Hook fixes us some rum punch and we head to the gazebo by the water to have lunch. The wings come with fries. The fries were good. The wings were ok, not bad.

It’s lazy time afterwards and we hit the lounge chairs. After some time, we get up and admire the views once again. We wonder if sharkie will make an appearance today. As I was scanning the waters, I spot a shadow swimming against the tide. And I see the telltale head pop out of the water. A turtle! I see a turtle! Two in one day, the honu gods are smiling on us! (Honu is the Hawaiian word for turtle)

So far we’ve seen the shark, and the turtle in the waters in front of the villa. Now we need the dolphin to make an appearance. The last time we stayed here there were two dolphins that would swim by in the early morning and evenings. We saw them a couple of times then. This year our neighbor saw a dolphin last week. Fingers and toes crossed we see one too!

Dinner tonight was my leftover steak and veggie medley from last night. Everything was still just as good. We declare February Point as one of our favorite this year.

And we declare today a good day, despite my not being able to snorkel. 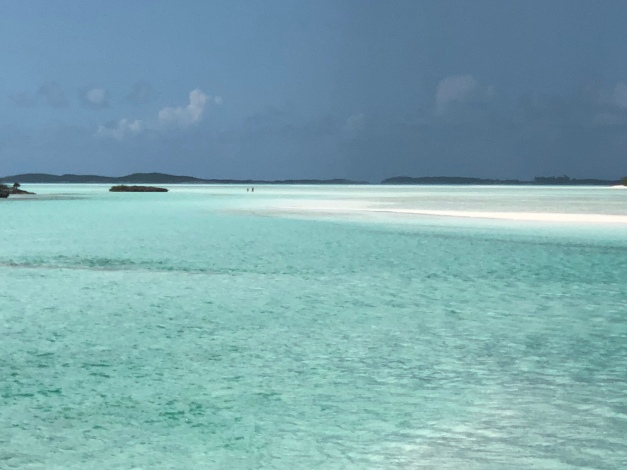 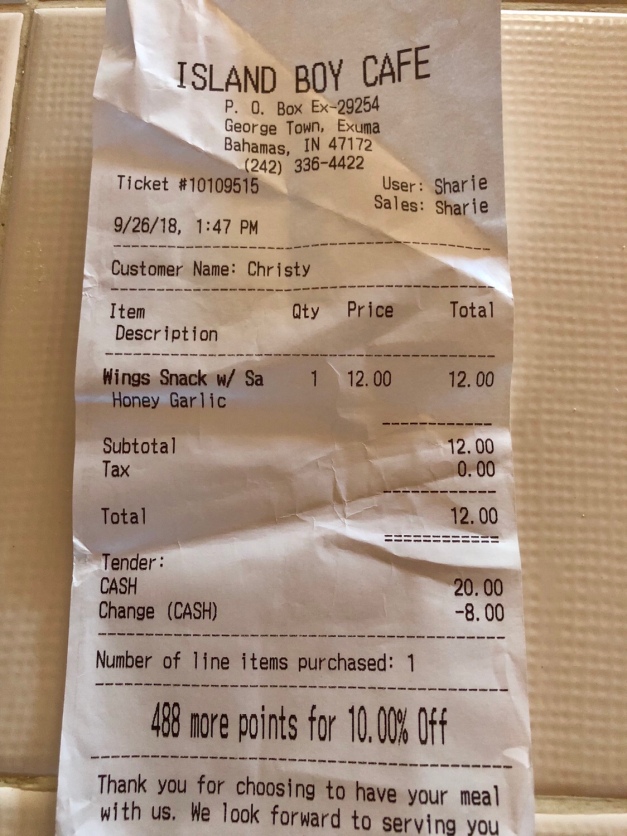