One Folly After Another

Posted by islandmoosie on September 24, 2018
Posted in: Uncategorized. Leave a comment

We started our day with toasted Mom’s bread, spread with that yummy French butter, and mine sprinkled with cinnamon sugar. Yes I brought cinnamon sugar sprinkles with me. What can I say, sweets are my downfall. And of course freshly brewed coffee. Can you believe I am drinking black coffee with only sugar? No half and half. 😮 Anyone who knows me knows that my coffee is really a bunch of sugar with a whole lot of cream and a splash of coffee. 😆 Alas I opted to pass on the big carton of half and half at Prime Island thinking that Exuma Market would have a smaller carton and just my luck they did not. So I’ve been drinking black coffee since. I may be a convert by the time this vacay is over.

After breakfast I decided to step outside to take some photos of the property. To get a higher vantage point, I stepped up to the low stone wall, walked along it, and took some photos.

As I finished, I looked down and thought that the step down from the wall was low enough that as I lowered my left foot that it would be at ground level. Oh boy was I wrong. Clearly my depth perception was either way off or I really do have alligator legs (I’m short and Hook calls them alligator arms and legs 😅). My foot didn’t hit the ground and instead I fell and landed/slid on the grass right on my stomach. Ouch! And what is the first thing one does when they fall? Why look around of course, to see if there were any witnesses to the embarrassing fall! LOL. Very lucky that I landed on the grass part and not on the exposed limestone parts. I had grass splinters embedded in my shirt and shorts, a bit of grass burn on my legs and hands but no real injuries. My right shoulder is a bit sore as I jarred it when I hit the ground. Times like these make you pause and think how quickly things can go awry. It’s also when I think that having purchased trip insurance, which includes medevac should something really serious happen, is important.

The loungers were calling so after cleaning up we headed back to the gazebo. We lounged for a bit enjoying the sun when those darn clouds moved in. What party poops! We hoped they were just passing clouds but they seem to like lingering around to annoy us.

Lunch again was the leftover crab salad and crackers with some cold drinkies while being mesmerized by the blue waters. 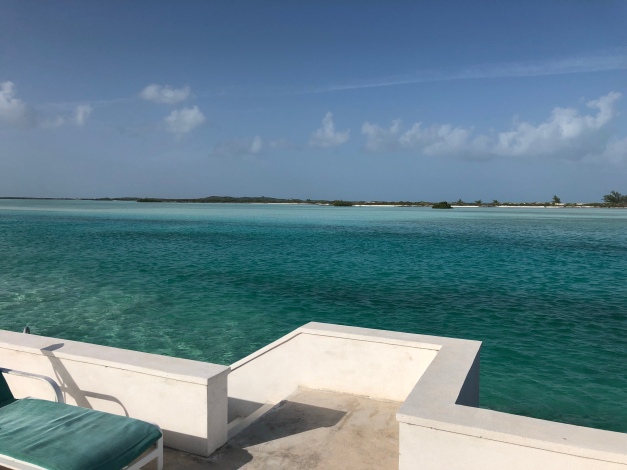 We were on the lookout for sharkie and hoping it would make an appearance. This time the camera was strategically placed close by ready to take that snapshot. As I was bending and looking down, I felt that funky feeling that I get when I know I am going to have an SVT attack. Great… Just great! Errrr my med is in the villa. I usually carry it around with me just in case, but I’ve been complacent lately. Hook recognized me acting ‘funny’ and went in to grab my meds and handed me the big chunk of ice from the cooler. Thank goodness I hadn’t gone into full blown SVT yet and I was able to convert the rhythm back to normal with the cold shock from the chunk of ice before I could take my med. Whew! Another crisis averted. Again, another reason for us to have trip insurance for peace of mind.

After this latest excitement we decided to lay low and answer the call of lounge chair gravity instead of kayaking over to the sand bars. Just as we stretched out, the breeze died down. Uh oh. That means one thing. No breeze equals noseums out in full force. Just as we commented about how still the air has become, we felt the little buggers. Wow those suckers wasted no time attacking us. We quickly packed up and called it a day. 🤐

We spent the rest of the afternoon indoors, in a/c, reading, watching golf, napping, and drinking some cold libations. What else can you do but roll with it!

Dinner tonight was the bbq chicken that we had gotten as takeout the other day and a packet of soup that we brought from home. And drinks. Gotta have cold libations. 🍹

Tomorrow the plan is to hit the beaches! And more rum cake!! 😋